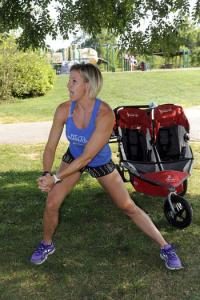 Some local women seek to regain their before-baby body.

With each cute baby Crystal Neilson delivered, she found her body more unattractive.

Her breasts sagged a little more. The skin on her stomach stretched out like a deflated balloon. “There was stuff falling out all over the place,” said the 34-year-old real estate broker.

After four kids, Neilson had enough of camouflaging her flab and flaws with circulation-binding Spanx In March, Neilson decided to say goodbye to her post-baby body. She had her breasts lifted and increased two cup sizes, her stomach smoothed and flattened with a tummy tuck and her love handles shaped and slimmed with liposuction.

She joined the ranks of women who turn to plastic surgery to try to reclaim their bodies after bearing children. Most get work on their abdominal areas and breasts.

“I look better than I did when I was 19,” Neilson said. “I have never looked this good in my whole life.”

Lifestyle changes, including fashions that are less forgiving and active mothers who are more aware of their appearance, have driven the growth in such procedures over the past decade, said Dr. Robert X. Murphy, president of the American Society of Plastic Surgeons. The surgeries have also become more socially accepted, he said.

Breast augmentations have increased 35 percent in the past decade,breast lifts by 69 percent and tummy tucks by 70 percent, according to the American Society of Plastic Surgeons.

“In a social circle, if one person has done it, then somebody else may get a little more inquisitive and they might follow through with it, too,” Murphy said.

Women spend tens of thousands of dollars on the procedures, which the cosmetic surgery industry calls “mommy makeovers.”

While carrying a child can be a rewarding life experience, many say it wreaks havoc on their bodies. Their figures just don’t pop back into place like those of Hollywood stars.

“It’s like a bomb goes off in your midsection and there’s nothing you can do,” said Kate Blankenship, who also had plastic surgery after having children.

Genetics sometimes plays a role in which women’s bodies bounce back, said Dr. Larry H. Lickstein, a plastic surgeon at the Cosmetic Surgery Center of Maryland, where Blankenship and Neilson had their surgeries. For instance, some women have more elasticity in their skin than others.

But even those with the best genes will see some kind of change in their bodies. As the abdominals expand with the growth of the baby, the skin and muscles stretch out. Sometimes the muscles that run down the belly separate in the middle and protrude, Lickstein said. Breasts stretch out with the flow of milk, then look deflated when they go back to the previous smaller size.

“You can’t exercise your loose skin away,” Lickstein said. “When you do cardio and aerobics, you’re burning calories, but you don’t get to pick where that fat comes off.”

Blankenship, 34, teaches a fitness boot camp class for moms. But when it came time to get her own post-baby body back into shape, she was stumped. When somebody asked if she was pregnant after seeing her tummy pooch, Blankenship thought an intervention was needed.

“I was able to nurse two kids, and afterward my breasts just looked traumatic,” said the Glen Arm mom of two. “I knew I would lose the weight. I was confident about that. But I still had loose skin and my abdominal muscles kind of sagged outward.”

Blankenship had a breast augmentation and modified tummy tuck and said she no longer has to hold her stomach in to get the flat abs she had before pregnancy. She is also comfortable in a bikini again.

“I was able to do the grunt work myself, and the surgery just polished it off,” Blankenship said.

Neilson said: “My husband told me not to expect anyone to make me look perfect, but I can truly say I think I look perfect.”

The cost of mommy makeover procedures varies by geographic area, said Murphy, who practices outside Philadelphia. He charges about $9,000 for 31/2 hours of plastic surgery, including breast and tummy work. Lickstein said his patients typically pay about $18,000 for mommy makeovers that may also include work on love handles.

Studies on the effects of cosmetic surgery on body image and self-esteem have shown mixed results.

Blankenship and others said cosmetic surgery has helped them feel better about their bodies. Their clothes fit better and they no longer obsess over flaws. They said it was something they wanted for themselves and nothing their husbands, or anyone else, encouraged.

“For me, it was about feeling comfortable in my own skin,” Blankenship said. She noted that she still has stretch marks, which she considers a badge of honor.

Some critics said mommy makeovers have fed into a culture that puts pressure on women to live up to unrealistic expectations of beauty,  rather than age naturally. Images of celebrities who are slim and trim weeks after giving birth worsen the issue, some say.

Diana Zuckerman, a psychologist and president of the National Research Center for Women & Families Cancer Prevention and Treatment Fund, said studies have found that cosmetic enhancements don’t necessarily improve the overall way people feel about themselves. Some women find themselves looking for the next fix and getting additional surgeries.

“It can be quite disappointing when people fix the body part and they find out they are still the same person,” Zuckerman said.

Harriet Lerner, a psychologist specializing in women’s issues, said women should “say no to the surgeon’s knife and to the impossible pursuit of perfection prescribed for women.”

“Regrettably, women are taught to feel shame, alienation and disconnection from our ‘imperfect’ bodies as we move through the life cycle” she said.

Pre-surgery counseling can help women better understand what to expect from the surgery, said Dr. Michele Manahan, an assistant professor of plastic surgery at the Johns Hopkins University School of Medicine.

People don’t think about the scarring that may occur with the surgery or the typical six-week recovery time it involves. If a mom has young children, she won’t be able to pick them up for days, and sometimes weeks, after the procedure.

“We want to make sure the patients are happy with the end result and will choose a surgery that accomplishes what they want,” Manahan said.

Cosmetic surgeons said they wouldn’t take patients who have unrealistic expectations or have health problems that might make surgery dangerous.“If there’s someone who wants to look like a 20-year-old Farrah Fawcett, we’re going to have to get a little perspective,” Murphy said.

It is unfair to negatively judge women who take the cosmetic surgery route, he said.

Some moms are waiting to get mommy makeovers later in life, after they are done raising children and they have fewer financial obligations.

Nancy Teasley, 60, decided to turn to plastic surgery after the last of her three children finished college “to get back in pre-baby form as much as possible.” Exercise and diet kept her in fairly good shape, but sagging skin left her stomach and breasts shapeless and floppy.

“It comes to a point where healthy eating and exercise just don’t work anymore,” said the Clarksville woman. “You’re just fighting against it all.”

Teasley had her breasts enlarged, liposuction on her love handles and a tummy tuck.

“I feel a lot more confident and happy with my body,” she said.